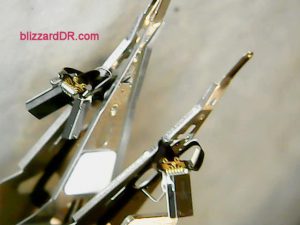 In a typical week for some data recovery shops you’ll get standard recovery jobs where drives or files are not accessible to the end user, or maybe an easy, dropped drive case where there is no platter damage and you just need to swap out the head stack assembly. You might also get 1 or even 2 of the more difficult cases. The more difficult cases are crushed flash drives where the circuit board is damaged, heads that came off and caused platter damage, or even a case with multiple platters that requires a platter-swap.
Well, last week I had all three cases. And I am happy to report that all 3 were successful recoveries.

Case #1: This was a flash drive that had been taken to a cell phone repair shop because the USB connector was ripped from the circuit board. Apparently this store has resoldered these in the past but they turned the job down in this case because the solder pads were gone from the PCB. I was actually able to temporarily repair this Sandisk 32GB flash drive without moving the NAND chip. 100% of the data was recovered. Yes!

Case #2: For this data recovery case I had a Seagate ST3320620A which is an older ATA EIDE drive from an external enclosure. The external enclosure was labeled as a Maxtor but the internal drive was labeled as a Seagate brand. Seagate also produced these same drive models labeled as Maxtor brand. In this case my donor for the platter swap was labeled Maxtor and was part number STM3320620A. This case was a dropped external drive that caused the spindle to seize. Sometimes you can free up the bearing enough to recover data but it just didn’t work this time so I had to platter swap.
Single platter swaps are not as bad because you don’t have the risk of the platters getting out synch/alignment but this drive was a 2 platter design. In some cases multi-platter swaps require special tools and/or techniques to keep the platters synchronized. This is where experience and R&D comes in to play. Once the platter swap was successful I had to replace the heads with a working head stack assembly. After that and a little magic from the PC-3000 UDMA from Ace labs, I recovered 100% of the customer’s data.

I encourage DR engineers to experiment, test, retest, practice many times before you attempt platter swaps for real cases. You will find differing opinions among techs in the DR business. At Blizzard we perform our own R&D for platter removal procedures for cleaning, inspection, and transfer. There also seems to be a common misunderstanding among computer repair techs that platter swaps/removal is a common procedure. In my experience this is not the case, platter swaps are a very low percentage of annual cases.

Case #3: Sometimes a head will get stuck to the platter (stiction) and stop the motor from spinning because it doesn’t have enough power to start. The stuck head (actually the slider) is working as a brake pad similar to the way disc brakes work on a car. With special tools and technique you can often “lift” the stuck head from the surface and in some cases the heads still work. Unfortunately in this case all 3 heads on this Seagate Momentus 7200.4 model ST9320423AS drive were broken. I’m not sure if the drive was powered on too many times or if the customer tried a bad tip they saw on the internet, where you slap the drive while spinning it up, but the heads were ripped from the arms.
Once the headstack assembly was replaced with a donor HSA I could recover data from head 1 and 2 but head 0 was extremely slow while reading. In cases like this we can disable the slow head and recover the data from the other platters at normal speeds. We then come back to the slow head and make multiple passes changing the recovery settings including but not limited to speed, direction, timing. Eventually, after multiple passes and 2 sets of heads I recovered better than 99% of the data. This isn’t always possible when there is platter damage. Some of the data is actually gone. Every pass increases the possibility of more head contamination and/or wear. I will typically use as many heads as needed until it’s clear that no more data can be recovered or the amount recoverable is not worth the cost of another donor drive.

So that’s it for this week, not a typical week but it was a good week because all necessary data was recovered even on these 3 difficult cases.