DIY data recovery cases have always trickled in to our lab, but recently there has been an upward trend for opened hard disk drives. Most of the time the data owner has opened the device because a YouTuber told them they could get their data back. Unfortunately, there were no details in the video about how a conventional disk drive is a delicate instrument with precision engineered parts that operate at unimaginable tolerances, so after the DIY attempt fails, we get the device sent to us with scratched platters, fingerprints, and contamination. Too often serious damage has been done and the customer has sacrificed some of their data to their YouTube god.

While we can only speculate, it seems that many times we could have performed a near perfect recovery and possibly even used the original head assembly. All too often the heads have been ripped loose and dragged across the platter, scratching an arc into the surface. Even after all of this destruction, we have even seen cases where it was obvious the drive was then powered on, causing even more loss of data. The Do-It-Yourself attempt has diminished the quality of the recovery, at the very least. In some cases the result is catastrophic and no data will ever be recovered. 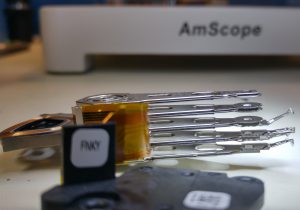 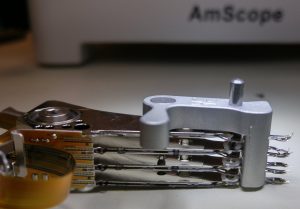 If you have found this post before you have opened your hard drive, we hope you will consider sending your device in before you put your data at even greater risk. Determine the real value of your data and then look at our data recovery charges.

Another common DIY failure is swapping the PCB. For most HDDs, it has been a long time since you could just swap the PCB and expect the device to work again. Even back then, it only worked if the PCB was the only problem. Most modern hard disk drives have adaptive data stored in a chip on the PCB, and without that adaptive data, the hard drive does not work. Read this post if you interested in more information about hard drive PCB ROM swaps. In most cases where a DIY attempt was made by swapping the PCB, it isn’t as bad as the previously discussed do-it-yourself failure, as long as you keep the original PCB. For some brands and models there is virtually no way to recover the data if you lose the original chip that contains the adaptive data. All too often the owner of the disk drive, or their local computer shop, mixes up the donor and patient PCB and sends the HDD in for recovery with the wrong PCB attached.

Lack of knowledge, skill, and experience can lead to total data loss. Now there is no need to put your data at risk because “we make data recovery affordable.”