At Blizzard we continue to prove that we can save customers some serious money. This past week we received two Seagate ST2000DM001 hard drives from a QNAP NAS box. The drives were configured RAID-1 which means they were a mirrored pair.  When working properly both drives are a mirror image of each other so they contain the same data. When the customer realized the device was down he found that both HDDs had failed. The two drives were shipped to DriveSavers and the customer was shocked from the estimate. According to our customer they quoted $8000! Typically a RAID recovery would cost more than a single device recovery because it could be an array of multiple drives. Recovery would involve having a certain number of the RAID members functioning and then recovering the data. In some cases this could be quite a daunting task. 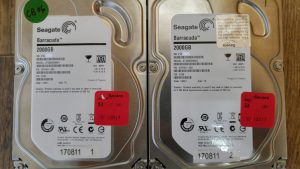 But in this particular case we only need to recover one hard drive and verify that it has the current data or at least that the timestamps are acceptable to the client. To complete the recovery we had to perform a head swap. After the new head stack was in place and the HDD was reassembled we had full access to the client data. What was the final price? Only $600 and that included return media and shipping. You do the math.

Some claim that flat rate data recovery is not possible, but we do it every day and with great success. At Blizzard our prices include return media and return shipping. Stop paying too much for data recovery. We have beat prices quoted by Drive Savers, Fields Data Recovery, File Savers, Geek Squad, Seagate Recovery Service, and Secure Data.