This week we had a few cases I would like to share. For USB flash recovery we had a 64GB Lexar with 2 NAND chips. The device had already been sent to another lab but the price was quoted so high the customer requested that the DR shop send it back. After calling to confirm that our prices were “as advertised” the client offered the recovery to Blizzard DR. When we received the device the 2 NAND chips had already been removed. 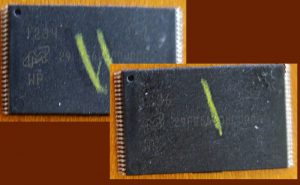 We inspected them under a microscope, straightened a few pins and then started dumping the data to files. Once we had the raw memory dumps we were able to reconstruct the data and get a full recovery. The customer was extremely happy because we completed the task within 24 hours of arrival and we saved them a chunk of money! 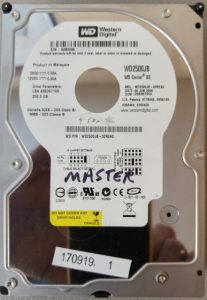 For hard drive recovery I would like to share 2 cases because of the age of the HDDs. The first case was a notorious Lacie USB device with 2 internal 3.5″ EIDE (PATA) drives. Each hard drive was a Western Digital model WD2500JB manufactured in 2006. The Lacie device was designed at the time when personal storage was increasing at a pretty rapid pace. Lacie was offering even MORE storage space by putting 2 physical HDDs in an enclosure and configuring them as a single device. In this case they were using RAID 0 but in some cases they use JBOD. RAID 0 can increase performance but the risk is that it doubles the chance for failure. Another problem with RAID 0 is if one drive fails you lose everything, there is no redundancy. That’s what happened here, one drive stopped working and the customer no longer had access to thousands of photos and documents. With our pro tools and expert training we were able to image both drives, rebuild the RAID, and get a 100% recovery. 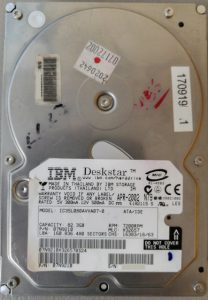 The next case was an even older PATA hard drive, an IBM Deskstar that was notorious for failure. The model was IC35L080AVVA07-0 with a capacity of 82.3GB and a manufacture date of April 2002. This HDD had been to another shop first, the client didn’t say if it was returned as unrecoverable or just too expensive. When we powered on the device the initial thought was that the heads were not able to read the service area but a hunch said the PCB was bad. After sourcing a compatible donor drive we first tried the PCB and were very happy that was the issue. We notified the client that this was not a level-3 hard drive recovery and he was very happy.

So once again we bring back a couple of dead hard drives. These devices were 11-15 years old and definitely past their prime. If you have important data and it’s not backed up then do yourself a favor and back it up today. It doesn’t matter if the storage device is old or new, solid state or mechanical, all storage devices are prone to failure.