This week we had a common case that was a typical result of a DIY recovery. The case was a Seagate 1TB external hard drive that stopped working. When disk drive media starts deteriorating bad sectors start accumulating until they reach a level that causes failure. At a certain point the drive’s firmware design can’t manage the failure rate and the customer loses access to the data.

In the early stages this can be straight forward for a data recovery lab and the price is often very reasonable. In this case, the drive inside the Seagate USB enclosure was a Samsung HD103SI 1TB 3.5″ SATA model. We certainly can’t blame someone for trying, but the do-it-yourself attempt to remove the HDD from the enclosure and get it to work resulted in a blown TVS diode. This added an extra step to the recovery project. While diagnosing and replacing the TVS diode is not a difficult job I would like to point out a common solution I see published that I do not agree with. Many DIY and even professional case studies show removing the TVS diode as the solution. I do not agree with this method. The TVS diode is there for a reason and the reason is to prevent damage to other components. Because many end users do not understand the methods to determine if is safe to power the PCB without the TVS diode, I highly recommend that it be replaced by a similar working component as opposed to just being removed. 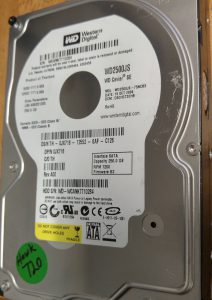 Another case we had this week was a Western Digital 250GB internal HDD model WD2500JS-75NCB3. This case had some bad sectors but it also had a bad PCB. Unlike the Samsung model above, this WD model required a replacement PCB. It is not uncommon to see older Western Digital HDDs with a failed PCB. In some cases the failed PCB will mimic a head failure and inexperienced DR techs might diagnose this as failed heads, which would increase the recovery estimate/charge.

At Blizzard DR we see a lot of older 80GB-250GB hard drives. Many older HDDs are in use at small businesses that have been around for some time. They often have older software that is not supported on newer machines, or it’s cost prohibitive to upgrade to the version that will run on new machines. Just remember, if you are a small business owner and find yourself in this situation, backup devices are inexpensive. What you can’t afford is NO backup 🙂

What are Hard Drive Recovery Levels?