I’ve written before about some things to consider before attempting “DIY” or letting a friend or computer shop fix your flash drive. We recently recovered a SanDisk Cruzer USB drive which serves as another great example of the risks that come with these attempts.

One assumption many people make is that computer repair shops are equipped to physically repair damaged electronics. Certainly there are those who do have that capability, but definitely not all of them do. Just because someone is tech-savvy and has a soldering iron doesn’t mean they know how to safely microsolder parts on a flash drive. 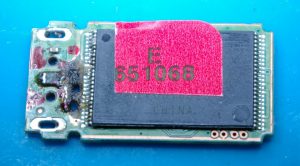 We have unfortunately seen many examples of botched repairs by professionals who overestimated their own abilities, but this one takes the cake as a lesson in what not to do.

In this example, the customer told us that they took their broken flash drive to a local “laptop repair guy” who unsuccessfully attempted to repair it. VERY unsuccessfully. 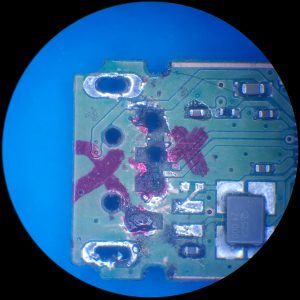 What we received was a flash drive missing its USB connector, and all four solder pads that the connector should attach to were burned away by what appears to be the overzealous application of a soldering gun. Some of the resulting holes burned completely through the opposite side of the circuit board, charring the fuse for the 5V USB power circuit, and even worse than that, the holes were perilously close to the NAND memory chip, with several of the chip’s contact pins bent and joined together with solder. It was lucky that there wasn’t significantly worse damage to the memory chip.

Keep in mind that to recover a conventional flash drive (“conventional” meaning a printed circuit board with surface-mounted components,) the memory chip is pretty much the one component that MUST remain intact. If that chip is catastrophically damaged, there is no chance of recovery.

Fortunately, with this chip, the only problem we had to contend with was the bent and bridged pins, which is far from the end of the world. We desoldered the chip from the board, carefully separated and straightened the pins, identified the SanDisk controller model, and transplanted the NAND to a matching board from our donor inventory for a full recovery.

As ugly as this USB pen drive was, even with the original PCB being practically beyond salvaging, that was kind of anticlimactic! But it’s cases like this why we have built a wide inventory of donor drives. We aim to repair the broken USB device when possible, but when the damage is this bad, a simple chip swap can do wonders.