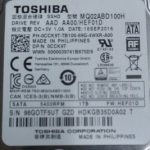 Toshiba laptop and portable hard drives in general seem to be very reliable. Most Toshiba 2.5″ cases we see are the result of the HDD or laptop being dropped. In this case the problem was quite different. This Toshiba is a hybrid known as a solid state hard drive (SSHD). Basically it is conventional device with spinning platters and moving heads, but they add some flash memory and hack the drives software so it behaves more like an SSD. In this particular case it was not dropped. Someone spilled a large amount of juice on the laptop. The hard drive soaked in the juice overnight. The result was that the printed circuit board (PCB) absorbed the juice. The juice got under the PCB coating and it actually looked like it had a thin liquid membrane. Most likely when the user and/or the local computer shop powered up the drive it fried the PCB. In some cases we would consider repairing the dead PCB but with the addition of a liquid membrane we decided just to replace the PCB 🙂

For standard hard drives we would just use a donor PCB and swap a single chip from the patient PCB to the donor PCB, or read/write the “ROM”. For SSHD devices there is an extra step. The SSHD stores data in the flash memory that is unique for each hard drive. When first powered on, after a chip swap to a good PCB, the hard drive will not initialize properly. Luckily there is a vendor specific command to re-initialize the flash and we can proceed with the recovery. In this case it was a 100% success.

If you have suffered a laptop spill or a dropped hard drive let Blizzard DR show you that “data recovery is affordable.”