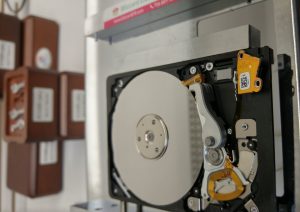 As time allows I like to share some of the less common recovery cases that we encounter. This week we had a visit from a Seagate ST2000LM007 mobile hard drive. These Rosewood family disk drives are notorious for catastrophic failures. Some speculate that they have “soft” platters but it could just be that we are seeing a lot of Rosewood HDDs that have suffered serious drops by the customer. They are also known by DR techs because Seagate locked the diagnostic port and made some firmware changes which resulted in a reputation for being a more complex device to recover. In our case this week the ST2000LM007 was in a portable enclosure that had suddenly lost power. The power loss resulted in the heads not returning to the parking area (ramp). Once the drive was re-powered the heads had stuck to the platters and resulted in the motor not being able to spin (stiction). With special tools and careful procedures in one of our clean work stations we were able to unstick the heads, return them to the parking ramp, and perform a 100% recovery. This was done without a head swap which saved the client quite a bit of money. If a power outage or fall has resulted in a non-responsive hard drive I recommend that you stop trying to power on the device, send it to a recovery professional and make sure you let them know if it was knocked over or dropped.

For flash drives we had an interesting case where the customer stated that the connector was broken. When we received the device the connector was straight and intact. All of the contacts were good. When we inspected the device  under the microscope we found that 3 capacitors had been sheared off right by the connector. We can only speculate how the connector was in perfect condition upon arrival but our experience and training allowed us to quickly complete this case by putting on three new surface mount capacitors. The result? 100% recovery without escalating to a chip-off status!