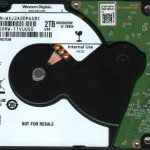 Each year, we see new hard disk drive models released and each year, we see the firmware get more complicated or the drive security increased by the manufacturer. Two of the most common portable drives we see by Western Digital are the 2TB Charger and the 4-5TB Spyglass models. Both drive families already presented specific challenges with their second level translator and SED lock. To complicate these drives even more, some newer versions of these drive families have incorporated encryption at the microcontroller level (MCU). 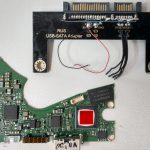 At Blizzard, we strive to keep up with and understand emerging storage media technologies. We recognized issues with the WD secondary translator early on and started sharing the information we found. Once these drives started coming in for recovery, we saw an increase in cases that were being outsourced to us. The higher volume of these drives allowed us to gain experience at an accelerated rate. Now we see the same happening with the WD portable hard drives that incorporate MCU level encryption. 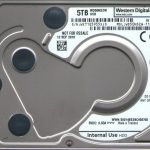 With the MCU encrypted Charger and Spyglass models, we noticed other data recovery companies asking questions online, and they often mentioned trying to recover these drives over USB. This might sound like it’s not a problem, but data recovery over USB has never been a standard practice at most data recovery companies. We either convert the drive to SATA using a donor board and ROM migration, or we rewire the USB board with SATA connections. So why were data recovery engineers suddenly trying to perform recovery over an unreliable USB connection? Because the encryption for these new portable USB drives is unique to each individual drive and requires the drive’s original controller on the USB printed circuit board (PCB).

With this new problem, we saw a device from DeepSpar known as the USB Stabilizer get some good reviews from data recovery labs. It looked like they were able to increase their chances of recovery on these MCU encrypted drives. At Blizzard, we purchased the USB Stabilizer for testing purposes and did some comparisons. What we found was the drives were still being put at more risk using a USB connection through the DeepSpar USB Stabilizer than they were when converted to SATA, due to longer read times. In one case, we read as much data from a test drive as we could in 1 week using the USB Stabilizer, then re-read the same data after converting the drive to SATA. We saw read performance improve from 1 week to 2 days just by converting the drive to SATA. It’s even possible that the drive was in worse condition after the 1 week USB read, but converting it to SATA still proved to be the correct solution. Continuing to make time for experiments like this can give us an edge and provide better recoveries for our customers.

Here is is our procedure for handling MCU-encrypted Western Digital Charger and Spyglass models like the 2TB WD20SDRW-11VUUS0 and the 5TB WD50NDZW-11MR8S1. This procedure assumes the secondary translator is in working order. Additional steps are required for a damaged translator.

If you have a dropped, damaged, or failing Western Digital Elements or Passport hard drive that needs recovery, we are ready to help you. Review our flat-rate hard drive data recovery prices.